An office award ceremony is a special time where people who work for the company are recognized for their good attributes to the business. It is important to hold these ceremonies so that those who have been working hard within your organization can be recognized and can get a sense of accomplishment for all that they’ve achieved. It lifts office moral, and even gets those who may not have tried their hardest throughout the year to participate more going forward so that they can be included in the next ceremony! 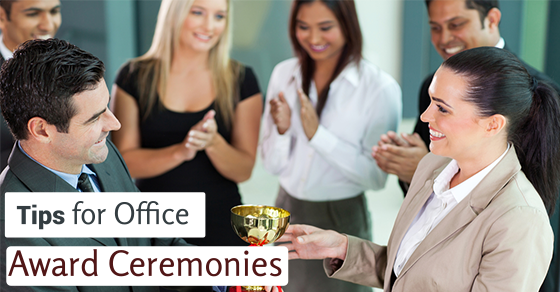 Before you throw an office award ceremony, you want to have it planned appropriately. You’ll need to find a good time to throw the ceremony, as well as a large room or area to hold it. Of course, it’s cheaper if you can find a way to throw it in your own office rather than renting an external location.

Regardless of where it’s held, if you follow the tips and advice below, your event will go off without a hitch!

It is always best to prepare ahead of time for a ceremony of any kind. Music, visuals, a stage or podium, chairs, tables, awards, and food should all be a part of the celebration. Your employees will be thrilled that you had taken the time to acknowledge their efforts and will be encouraged to work hard to earn their own award at your next ceremony!