Oscar Winners and their Memorable Reactions

Winning the Oscar is the ultimate achievement for an actor. It’s an award that showcases the year’s best performances across a wide range of genres. 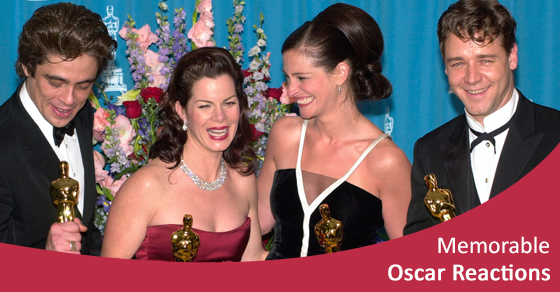 When winners hear their names being announced as winners they often can’t help but become overwhelmed with shock, surprise, and even a touch of madness.

The following are some of those Oscar winners and their memorable reactions!

For his 2014 role in “The Theory of Everything,” Eddie Redmayne was awarded the Oscar for Best Actor. This was his first time winning the award, and his reaction showed his overwhelming joy.

When the actor heard his name announced he was visibly shocked. Knowing that he beat out audience favorites like Michael Keaton and Bradley Cooper likely added to his surprise!

Hugging his wife, the actor was almost in tears. In fact, he couldn’t make it all the way through his acceptance speech without once again becoming overwhelmed with amazement.

Adrien Brody won the award for Best Actor in 2003 for his powerful performance in “The Pianist.” As a relative newcomer, nobody fully expected the young actor to walk away with the Oscar.

In fact, it’s safe to say that Brody himself didn’t expect to win it by the reaction he gave when his name was called. He was so overjoyed at winning the award that he took Halle Berry (who was presenting the award) in an embrace and planted a kiss on the lips.

After the draw out kiss, Brody exclaimed to the shocked actress that she probably didn’t expect that to be “in the gift bag.”

Brody’s reaction was the highlight of that year’s ceremony and was all over the news media in the following days.

In 1999, Roberto Benigni brought to movie audiences his delightfully tragic film “Life is Beautiful.” The film was up against those of heavy-hitters like Steven Spielberg and Elia Kazan.

Upon having his name called for the award for Best Foreign Language Film, Benigni began walking over the seats in the pavilion through other guests. This was a most-unusual way to make one’s way to the podium to give an acceptance speech.

Benigni went on to win the Oscar for Best Actor that same night. Fellow actor Tom Stoppard made reference to Benigni’s show of joy when receiving his award later during the ceremony.

Watching actors receive the Oscar is an event that captivates millions of viewers each year. These are just a few of the most memorable reactions from the many Oscar winners throughout the years.