Every year, thousands of film and TV fans tune into awards shows like The Oscars and The Golden Globes to see their favorite stars walk the red carpet and hopefully, receive an award (or two) for their talents. 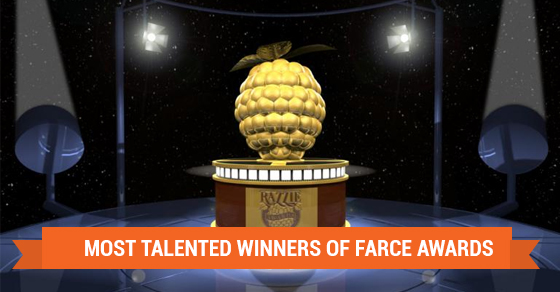 Every actor, director, and producer dreams of being honoured at one of these ceremonies.…but there’s one awards show that gets a bit less of the spotlight: We’re talking about The Golden Raspberry Awards, otherwise known as the Razzies.

The Razzies have been held in LA every year since 1980 to honour the worst performances and films in the film industry. For most involved in the film industry, the annual Golden Raspberry Awards ceremony is a dreaded event, and very few stars attend the event to receive their honours.

That said, there HAVE been a few exceptions.

Here are five Golden Raspberry Award Winners who surprised everybody by attending, and proudly accepting their trophies at the Razzies!

In 2010, Sandra Bullock was nominated for her performance in All About Steve and expressed interest in attending after finding out about her nomination. She ended up winning, and said in her acceptance speech, “I didn’t realize that, in Hollywood, all you had to do was say you’d show up, and then you’d get the award. If I’d known that, I would have said I was appearing at the Oscars a long time ago.”

Luck should have it, that the following night she did attend the Academy Awards and received an Oscar for her performance in The Blind Side.

In 2004, Halle Berry was nominated at the Golden Raspberry Awards for her poorly received performance in Catwoman. She accepted the award with the Oscar she’d won for Monster’s Ball in one hand.

In her acceptance speech, she thanked her director, stating, “He loves me so much that he convinces me to do projects even when he knows that it is shit.”

Ben Affleck is one of very few stars who can brag about being nominated for three Razzies in one year! In 2014, Affleck was recognized for his awful performances in Gigli, Daredevil, and Paycheck. Yet even after that, he didn’t receive a trophy!

He claimed on the radio that he felt stiffed and received his award on Larry King Live a few weeks later, where he complained that it was cheap and started to break it apart.

His semi-destroyed award was sold on eBay for almost $1000, which was used to fund the following year’s ceremony.