What are Blue Plaques?

If you have ever travelled abroad, principally to the United Kingdom orother parts of Europe and North America, and you have done sightseeing tours—you may have noticed blue plaques displayed proudly on old buildings, trees, and other public areas. 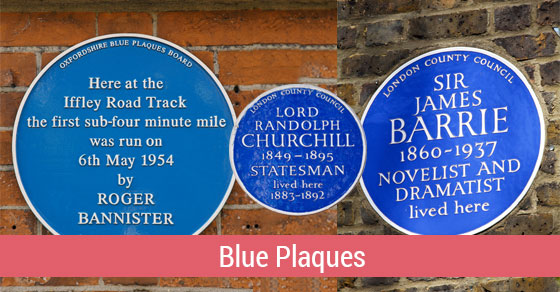 They are marked with the name of historic figure, a significant event, and the pertinent years of importance to the landmark. These are known as Blue Plaques.

The world’s first blue plaques were hung in the city of London England in the 19th century to signify homes and workplaces of people of historic significance.

It’s common place to see the houses and haunts of writers such as Charles Dickens, Oscar Wilde, and Sir Arthur Conan Doyle through the London Boroughs, allowing tourists to breathe in the air and ambiance similar to the creators of their favorite works.

The concept was originally established by the Royal Society of the Arts in 1867, but was taken over by English Heritage in 1986. They continue to add about 12 significant plaques yearly marking modern celebrities such as John Lennon.

Other countries have followed suit in the dedication of Blue Plaques, most notably in cities such as Paris, Dublin, Rome, and Oslo, but also nationally in Canada, the United States, and Australia.

The concept of the Blue Plaque is important to local communities as it helps drum up tourism, brining interested parties to specific landmarks to share in a piece of history. It in turn helps boost economies and recognize the amazing events that took place in shaping the world around us.

Next time you are exploring globally or locally, watch for simple signs that mark century homes and public places with the names of those who came before. You never know what cultural events make have taken place in your own backyard!

Looking to tour some famous Blue Plaque of London? Check out this list of English Heritage Blue Plaques!

Or to check out some of Canada’s Historical Sites, check out this list.

Do you know a famous athlete, artist, writer, musician or other celebrity that made an impact on your local community? Do you want to create your own version of a Blue Plaque and recognize your hometown heroes? Then visit us online at Hoult-Hellewell to get started!