Who has won the most Grammys?

Awards season has almost come to an end for 2015, but that doesn’t mean it’s too late to beef up your award trivia knowledge for upcoming summer game nights! 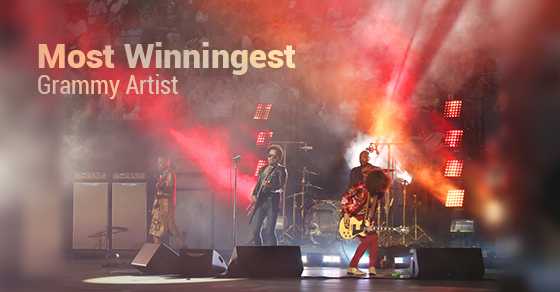 With that being said, we’re taking a look at which celebrities have won the most Grammy awards.

While some musicians and songwriters are still pining after a Grammy to call their own after years and years of nominations, certain others have rounded up 31. Can you guess who? You’ll have to make it to the end of this list to find out!

Yo-Yo Ma is a French-born Chinese American Celllist who has been performing as a child prodigy since the age of 5. He’s produced 90+ albums, and has won 18 Grammy Awards.

Ray Charles is an undeniable American legend and won 17 Grammys between 1947 and his death in 2004.

Eric Clapton is often referred to as one of the most important and influential guitarists of all time, and his 18 Grammy Awards are a testimony of this.

Jimmy Sturr has won 18 out of 24 Grammys for polka music in the history of the ceremony.

With 18 Grammy Awards to her name, Franklin won the award for Best Female R&B recording so many times that some people call it the Aretha Award!

Jay-Z is one of the world’s most famous rappers and best-selling artists of all time, selling over 100 million records and tallying up 19 Grammy Awards over the years.

Sitting just one spot ahead of her husband, Beyonce has won 20 Grammys over the years and is the most nominated woman in the history of the awards. Talk about girl power!

A Jersey legend and American icon, Bruce Springsteen has 20 Grammy Awards to his name.

Jazz guitarist, Pat Metheny, won his first Grammy in 1983 and has since collected 20.

Vince Gill has won 20 Grammy Awards, more than any other country artist.

Williams composed the theme for the original Star Wars, and has won 21 Grammys.

This controversial artist has 21 Grammys to his name. Surprisingly enough, none of those were stolen from Taylor Swift.

At 22 awards, U2 has won more Grammys than any other band.

This composer, conductor, and arranger won 23 of the 72 Grammys he was nominated for during his life.

Motown Legend, Stevie Wonder has a whopping 25 Grammys to his name.

Pianist, conductor, and composer Boulez has won 26 Grammys in his lifetime.

Nearing the top of the list, Quincy Jones, record producer, composer, arranger, and conductor, is also a jazz trumpetist who has won twenty-seven Grammys since 1951.

American country and bluegrass singer, Krauss has won 27 Grammy awards, the most for any female artist.

Sir Georg Solti, a Hungarian conductor, has won more Grammys than anyone in history, with 31 to his name.