Out of all the awards in professional sports, the NBA MVP is one of the most prestigious and respected awards of them all. When players win this award, they not only know they have done something right, but they know they’re likely going to make their way into the Basketball Hall of Fame. 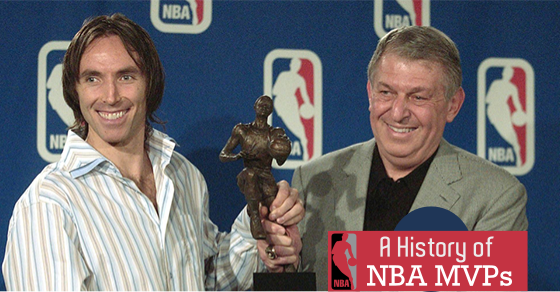 The Most Valuable Player award has been given out every year since the 1955-56 basketball season, and since its conception there have been tons of surprises, let downs, and back-to-back winners. But the guy who walks away with the trophy is getting more than just that; winning MVP brings many perks and notability for both the player and their teams, and the honor will go down as a part of NBA history.

Being recognized as MVP isn’t something that many have the honor of being awarded, yet some are fortunate enough to have claimed the title several times throughout their careers. Kareem Abdul-Jabbar has won more Most Valuable Player Awards than any other basketball player in history, and the awards were rightfully earned seeing as he has blocked more shots and scored more points than anyone else in his time. Kareem left the NBA in 1989 at an impressive 42-years-old.

Other players to have come close to earning as many MVP awards as Kareem include Bill Russell, Wilt Chamberlain, Michael Jordan, and most recently Lebron James. With James being as young as he was when he entered the NBA, he has a chance at beating Kareem’s record for most MVPs.

In 2015, the MVP title went to Stephen Curry, a guard for the Golden State Warriors based in Oakland, California. He won the award partially for his impressive shooting skills on the court, and recent headlines have been naming him the best shooter of all time.

About the MVP Award

When a basketball player is elected as MVP, they receive a trophy as well as other gifts and incentives. It is a greatly celebrated event and much praise is given to the player for their hard work during the previous basketball season. This also makes the player more valuable to the NBA organization as a whole, which is why they often get additional perks from the association (you didn’t really think LeBron paid for all of his cars himself, did you?!).

Now that this year’s winner has already been claimed, there is already heat under several players to bring up their game for next season. Anyone have ideas on who will take the trophy next year?