With the huge pressure not only to perform, but to win, there’s no wonder why so many athletes have been found to use performance enhancing drugs to ensure they get the title. Unfortunately, many of these athletes have been found out and as a result, had their titles and awards stripped from them, leaving nothing but a memory of how hard they pushed themselves. 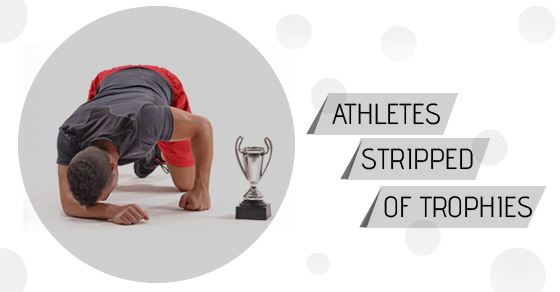 The moral of this story is to play fair, but here’s a list of some of the most memorable cases of the last few years:

The first athlete that comes to mind when thinking of athletes stripped of their titles is, of course, Lance Armstrong.

This seven-time Tour de France champion was stripped of all his titles when he was found to be doping the whole time he was competing in these competitions.

Although now a retired athlete, Armstrong is the founder of the Livestrong foundation that provides support and treatment for those suffering from cancer.

Named “the fastest man in the world” after winning the Gold medal for the 100-metre dash at the 1988 Seoul Olympics, Johnson was soon after busted for failing a mandatory drug test.

His blood was found to contain the steroid stanozolol, an illegal performance enhancing drug.

Although his Olympic medal was taken from him, his memory and title of Fastest Man remains strong.

Jones was the first woman to win five medals at the Sydney Olympics in 2000. She was on a role as a track superstar, but eventually tested positive for drug use and had all her medals removed.

A hero for all young female athletes, it was a huge disappointment when she was found to be a phony. She was banned from the 2008 Olympics and sentenced to serve time in prison.

Although it had been happening for many years prior, Liljenvall was the first documented case when an athlete was disqualified for taking performance enhancing drugs at the 1968 Olympics in Mexico City.

This member of the Swedish pentathlon team had his medal taken from him after his blood alcohol level was found to be above the allowable limit. Supposedly he had a couple of drinks before competing to relax a focus on the game.

Not only was he stripped of his medal and his title, but the entire Swedish men’s team had to give up their Bronze medals as well.