The History Of Trophies

As most of us have experienced at one point or another, a trophy is a special award that people receive when they have either won something, been named as something, or have done something important. Of course, the award is given to the greater good; the person who most efficiently suits the category for the award being given. Trophies have been around for quite some time, although most people don’t know their origin. 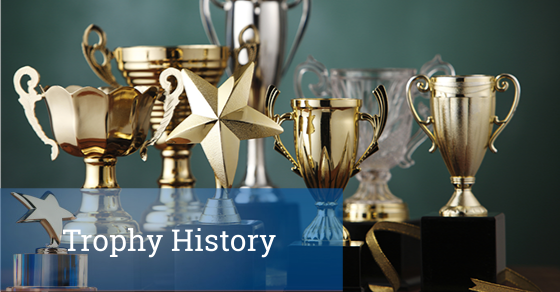 Trophies have always come in a variety of forms. A different materials are commonly used and in all actuality, a trophy can be any object given to the winner of the award.

Nowadays, trophies consist typically of glass or metal, and adorn the name of the receiver on a small decal.

Some of the first physical awards were wreaths which were given to Olympic winners back in Ancient Greece. This evolved in the 1600’s when chalices were given to the winners of sporting events. This is when sterling cups became popular trophies. This trophy is still given out at many sporting events today, especially in racing.

While trophies came into existence because of Ancient Greece, hence the word trophy being derived from the verb trope meaning “to rout” in Greek, they are still very trendy in today’s existence.

Today, we use plastic, metal, glass and other mediums to create modern trophies. These can be purchased at local specialty shops and online. Depending on what type of trophy you need and how many, there are places that specialize in creating unique, one-of-a-kind awards for very special occasions.

Where Are the Most Popular Trophies Often Given Out?

NASCAR races, the Grammy’s, the Oscars the Superbowl, and other high-class, popular award ceremonies give out trophies to the winners of specific categories, and are watched by millions of people each year.

Other popular events, although with a much, much smaller audience, include occasions like children’s sporting events and office award ceremonies. Thousands of these are held across the country every year to celebrate personal accomplishments on a smaller scale.

As the reasoning behind award ceremonies continues to expand, we’re seeing that trophies aren’t just for those who are in the entertainment or sports industries. Whether you’re looking to start your own award ceremony or simply want to improve upon an event that already happens, contact Hoult and Hellewell for new ideas and one-of-a-kind design options!