There’s no doubt that when North Americans think of famous trophies, the usual suspects will come to mind: Grammy’s, the Super Bowl, the World Series trophy and others that are highly viewed when televised. But there’s one award that takes the cake as the most recognizable in the Western world: the Oscar. 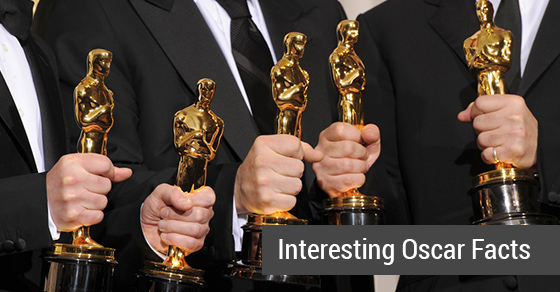 We’ve rounded up this list of five little-known facts about Oscar Statuettes that will make this illusive trophy even more interesting. Who knew there was so much depth to that little gold man on a pedestal?

The real name of this famous trophy is “the Academy Award of Merit”, but it’s known by the public as Oscar. Legend has it that the statue got its name when Margaret Herrick, an Academy librarian who would eventually become executive director, said that it resembled her uncle Oscar. The name “Oscar” was officially adopted by The Academy in 1939.

Cedric Gibbons, MGM art director, gets the credit for designing the statuette that is now ubiquitous with the film world. He came up with the imagery of a golden knight atop a reel of film, with hands clasped on a crusader’s sword. The Academy then commissioned George Stanley, a well known Los Angeles sculptor to render the three dimensional version.

Oscar stands 13½ inches tall and weighs 8½ lbs. For anyone counting, that’s a BMI of 32.8, meaning Oscar is technically very overweight!

The first statuettes to ever be presented at the Academy Award ceremonies were made of solid bronze and gold-plated. After a few years, the bronze core was kyboshed and replaced with Britannia metal. Britannia metal is similar to pewter. The Britannia metal core is plated in copper, nickel silver, and 24-carat gold.

A select few Oscar statuettes were made of painted plaster during World War II due to the metal shortage. After the war, The Academy invited recipients of these plaster trophies to redeem them for the gold-plated version.

Despite the fact that there is a fixed number of categories every year, the Academy has no way of knowing how many statuettes will be awarded until the envelopes are opened on the night of the awards. This is due to the possibility of ties, or multiple recipients splitting the prize in some categories.

The Academy makes sure there is a surplus of statuettes, and any unused awards are kept in the Academy vault until next year!