Plaques or Traditional Trophies: How to Choose?

Commemorating someone’s achievements is a wonderfully important thing to do in all areas of life, from work to sports and recreation. 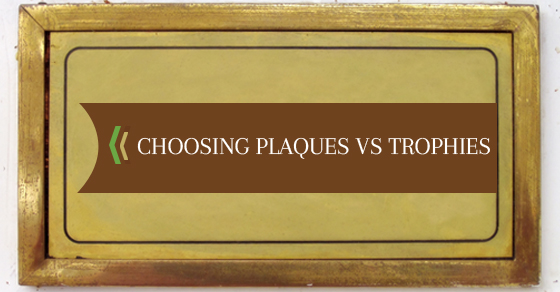 People of all ages enjoy the appreciation that goes along with receiving a traditional trophy and, well, why shouldn’t they? Being recognized for a job well done is a crucial part of character and skill development, and it feels really nice to be good at something.

The question here is whether to go for a traditional trophy or to opt for a more discrete plaque.

Here are some of the pros and cons of both:

Everybody likes a traditional trophy! It looks great while it’s being presented, and it looks even better sitting on a mantelpiece or a bookshelf.

Traditional trophies generally have some form of sculpture that sits on top of a solid wooden block, giving you the option to customize the sculpture to fit the subject you’re presenting for.

These are great for significant titles like MVP, most improved, highest sales, and other large achievements, or for annual awards that are returned and re-distributed to the new winners each year (think Stanley Cup style).

The only downfall is that they tend to take up a lot of space, so if you’re giving the trophy to someone you know doesn’t have a designated space large enough to accommodate such a gift, you might want to re-think the traditional trophy.

Because a traditional trophy is such a huge honour to receive, you may want to save it for the top positions in your team, school, or workplace. Purchasing a trophy for everyone involved in your company or organization can add up in cost, so if you’re looking for a more economical alternative, ordering plaques in bulk can be an excellent way to go.

Customized plaques come in a wide variety of shapes, sizes, and materials, and are perfect to pay homage to someone for their participation, support, or financial contribution.

They’re smaller and easier to keep in the home without making them a huge focal point in any room, and for those traveling to awards ceremonies, customized plaques are easier to transport.

Although large, trophies in general are greatly appreciated by all involved. So whichever option you choose, you’re sure to generate smiles and feelings of contentment!