Sports is a high dollar industry, drawing millions of fans across the world to watch high caliber athletes perform at their peak ability. Fortunes are spent by companies to promote, host, and organize sporting events and ad campaigns while fans spend money on tickets and gear. 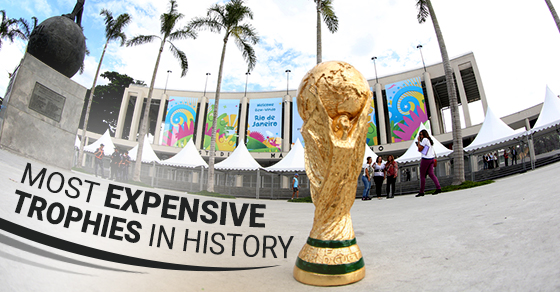 For high-profile sports, the quality of recognition has to suit the recipients, so let’s take a look at the most expensive trophies world-class athletes compete for.

The NBA is one of the most valuable sports enterprises in the world, but surprisingly, its trophy doesn’t come close to some of its costlier counterparts. Still, it’s a highly coveted award with a lot of social cache, even if its price tag only comes in fifth on our list.

All in all, the trophy costs around $13,500 to make, largely due to its gold content (or lack thereof). It looks like its gold, but is uses an overlay to reduce costs.

Football is as rough and tumble a sport as it gets, unless you start looking at boxing or other sports involving fighting. The trophy on the other hand is finely crafted by none other than Tiffany and Co., the jeweler responsible for the iconic movie Breakfast at Tiffany’s and fine jewelry. The Super Bowl Trophy is small but costly, which shouldn’t be surprising considering its construction, coming in at a respectable $50,000 to make.

The classic origins of the Stanley Cup

Hockey was played over a hundred years ago, and one of its first observers was one of the early governor generals of Canada Lord Stanley. Its early stature was modest compared to the towering statue of today, weighing more than 34 pounds. The current Cup is reportedly $23,000 to make, and since it spends its time passed around to the team and supporting members, awarding the winning team is a costly endeavor.

Tiffany’s also makes the Commissioner’s Trophy, although its price tag is a little bit more modest. It weighs as much as two Larry O’Brien trophies, but only costs $18,615.

The World Cup trophy was never that expensive to make, even accounting for inflation, which is important to take into account since it’s not valuable like a relic or collectible might be. It isn’t particularly large or heavy, but is made of 11 pounds of pure solid gold, making it worth $20 million!