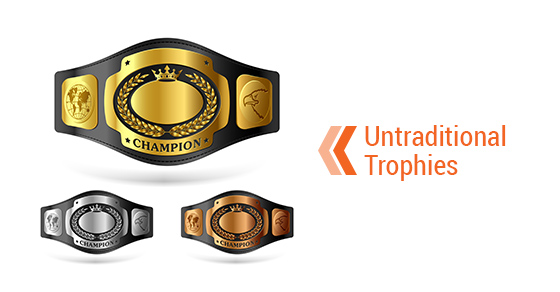 When people think of trophies, images of giant brass cups, shiny silver bowls, and chiseled statuettes often come to mind. That being said, there are a number of well-known trophies that are a little more outside the box. Many of them wouldn’t even be recognized as a type of trophy at all if it weren’t for the prestige and popularity of the events for which they’re awarded!

Here are a few of the less traditional trophies that exist in the competitive world:

The Venus Rosewater Dish is the trophy awarded to the Ladies’ Singles champion at The Championships in Wimbledon.

A traditional Rosewater dish was used in ancient England after eating to catch rosewater poured over diner’s hands.

This specific dish features an image of the goddess Venus. The winner doesn’t get to keep the trophy, but does receive a three-quarter replica of it.

Since the rise of professional wrestling, champions have been presented with elaborate belts designed with plates of gold and other precious metals on a leather strap. The color, designs, and even the metals used vary depending on the title.
Similar belts are awarded to professional boxers.

The top prize for one of golf’s most prestigious tournaments resembles something off the men’s rack from Macy’s more than it does a trophy. The annual tradition of the Green Master’s Jacket dates back more than 60 years.
Every year the tournament’s previous champion helps the new winner put on the fairway-green coat. The catch is that although the champions technically get to keep their jackets, they must house them and only wear them at the tournament’s host, Augusta National Golf Club.

This prestigious golf tournament hosted in Morocco awards the winner a massive bejeweled shiv. Let’s hope there are no hard feeling between the winner and runners up or things could get bloody!

At the end of one of the longest and most grueling bicycle races in Europe, the winner is presented with a cobblestone. The cobblestone might not be glamorous on the outside, but it is meant to represent the more-than-50 km stretch of cobblestone that cyclists must endure to complete the race.
In addition to the trophy, winners are awarded $39,000.
This just goes to say that trophies don’t need to be shiny, sparkly, and plated in 24k gold to be prestigious! If you’re looking for unique and original ideas for trophies, talk to our experts today! 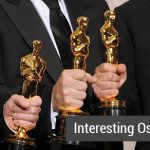 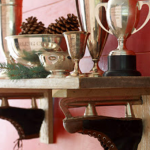