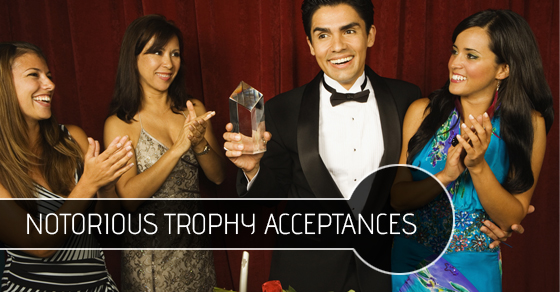 Awards ceremonies are always fun to watch for the jokes, the outfits, and, of course, the drama. For the most part the ceremonies run fairly smoothly, but every once in a while there’s an event that we keep talking about for years to come.

Whether they’re passionate, political, or merely pessimistic, award acceptance speeches can stay stuck in our minds forever.
Here are three of the most memorable trophy acceptances to date:

Though it happened more than 40 years ago, one of the most notorious trophy acceptance speeches was, in fact, a trophy un-acceptance.

Winning the Academy Award for Best Actor in 1973 for his role of Don Vito Corleone in The Godfather, Brando refused to even attend the awards ceremony in protest of the treatment of the Native American community.
In his place, Shasheen Little feather (a Native American Rights Activist) delivered a small speech after waving her hand to refuse the award.
The speech is quoted as saying, “The motion picture community has been as responsible as any for degrading the Indian and making a mockery of his character, describing his as savage, hostile and evil. It’s hard enough for children to grow up in this world. When Indian children watch television, and they watch films, and when they see their race depicted as they are in films, their minds become injured in ways we can never know.”

Despite his best intentions, media at the time harshly criticized his justification of refusing the prestigious award.

In 2002, Adrian Brody was the youngest person to ever receive an Oscar for Best Actor for his performance in the film The Pianist.

When his name was called, he jumped up in youthful excitement and ran to the stage, grabbing presenter Halle Berry and, much to her surprise, planted a big kiss on her lips.

After finally taking the microphone, he laughed and made a comment to her about his surprise kiss not being in the gift bag.

West, known for his self-promotion and outspoken personality, was an audience member during the Best Female Video win at the 2009 MTV Video Music Awards. To his surprise, Taylor Swift won over Beyonce for Best Video, and this didn’t please ‘Ye at all.

After West left the stage the crowd clapped and cheered in support of Swift, but West refused to apologize for his crude behaviour. 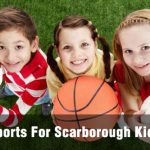 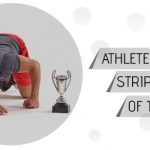